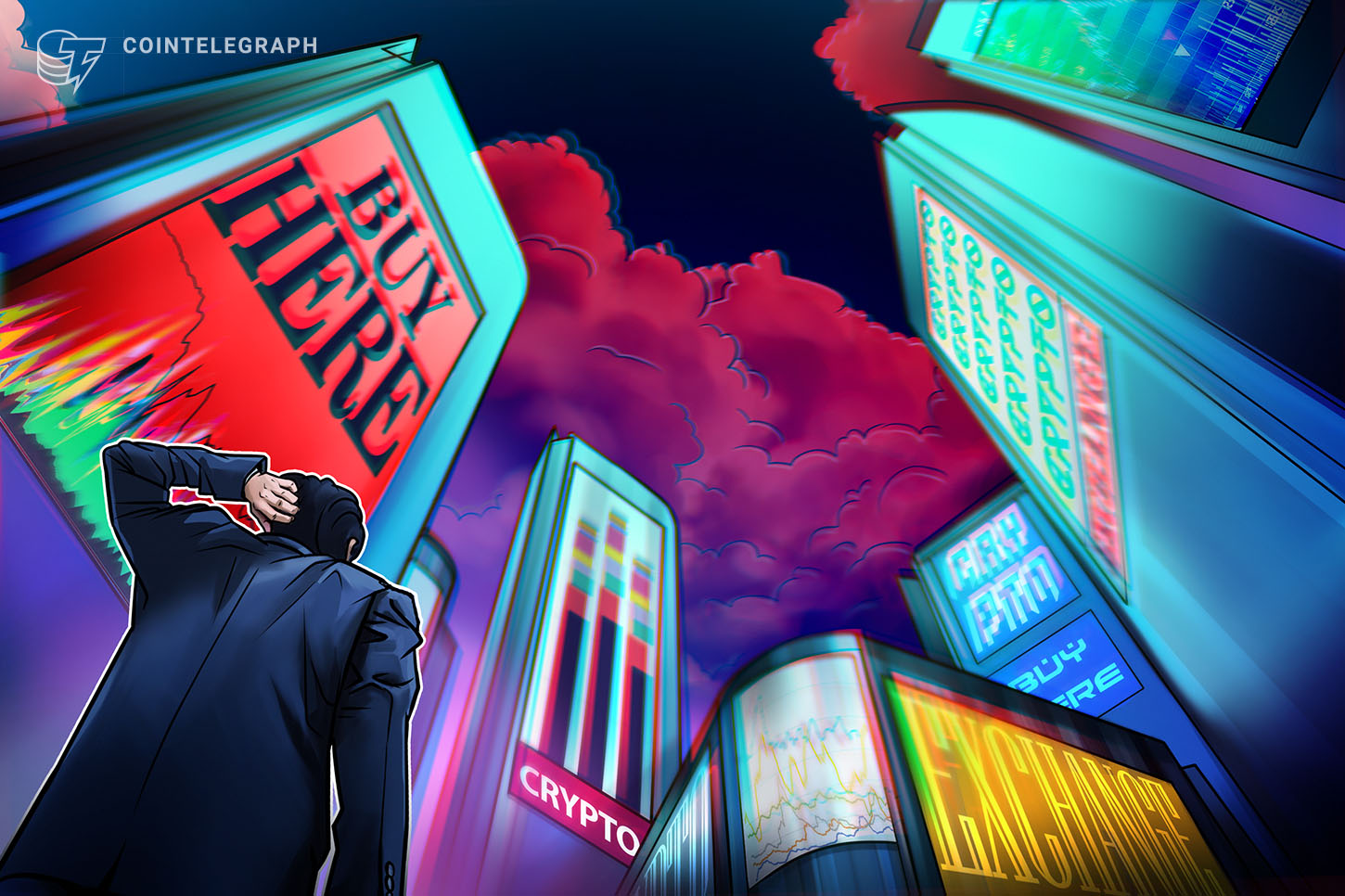 Today, cryptocurrency data aggregators are tasked with being the first point-of-contact for newbies entering the space and also providing up-to-date information to experienced users. While the COVID-19 pandemic has caused a global economic downturn, the crypto industry is booming. Previously skeptical investors have started to test the waters, and data providers are dying to make a lasting impression.

Market data aggregators, or data providers, are platforms that collect inputs from various exchanges to present users with data on trade volume, historical asset prices and market capitalization. These platforms usually offer their own APIs for data distribution to blockchain projects and financial media outlets, alongside their standard web interface and mobile application.

From exit-scams to pump-and-dump schemes, the cryptocurrency community is no stranger to fraudulent activity. However, what may seem like an obvious scam to veteran crypto investors might not appear as such to a newcomer. Smart investments require smart data, so data aggregators are doing everything they can to provide users with the best data possible.

Though methodologies varied across different data sources, daily trade volume had been the primary metric used to rank exchanges for the last few years. For the time, it was reasonably intuitive: Exchanges with higher volumes have more active traders, and more active trade creates greater liquidity.

The problem became apparent when in March 2019, Bitwise Asset Management published an analysis detailing how 95% of volumes reported by Bitcoin exchanges on CoinMarketCap were purportedly fake. After developing an infrastructure to read data directly from the trading interface of 81 exchanges, Bitwise noted inconsistencies with the volumes reported by many exchange APIs.

According to the report, exchanges had been misreporting their volumes to CMC, giving the public a false impression of the Bitcoin market’s size. Exchanges were inflating their volumes to rank higher on the listings and entice users onto their platforms. The report also argued that Bitcoin’s (BTC) actual market was far more organized and regulated than previously estimated.

According to Gerald Chee, head of research at CoinMarketCap told Cointelegraph that exchanges appeared to take advantage of CMC. Since the Bitwise report’s publication, CMC has launched its Data Accountability & Transparency Alliance to foster an ethical and open environment among exchanges, and it has also released several new ranking algorithms that aim to provide accurate data regardless of exchanges misreporting volumes.

While the Bitwise report covered BTC/USD and BTC/USDT exchange pairs, it did not scrutinize other markets in the space. However, data analytics firms were already getting busy. An investigation conducted by data analytics firm The Tie in March 2019 claimed that 86.57% of reported cryptocurrency trading volume appeared suspicious and that 75% of exchanges presented unusual volumes and questionable activity. Additionally, in the same year, Alameda Research published a report stating that exchanges were falsifying 70% of all cryptocurrency volume data on aggregator platforms.

When exchange-ranking sites rely on volumes, trading platforms are incentivized to inflate volumes. When new project listings have both trade volume prerequisites, it incentivizes teams to overreport their numbers to get on the list at all.

It’s crucial for a project to be listed on a top-tier market aggregator, as it helps with growing the userbase, and provides greater exposure and access to investors with more capital. Therefore, some projects succumb to the requirements of top data providers and fake volumes to secure listings.

Several data aggregators were under fire this year. Most data providers were using exchange volumes in their ranking calculations and swiftly shifted to more accurate models. CoinGecko implemented a Trust Score to combat fake volumes by including web traffic, bid/ask spreads and depth cost metrics into the equation.

Nomics added an Exchange Transparency Rating to its ranking system in April, later adding the Transparent Market Cap and Transparent Volume metrics in May, which composites the market capitalization and volume of all coins listed on exchanges given an A+ transparency rating on the platform.

By November, CoinMarketCap had announced its new Liquidity Metric, a system designed from the ground-up to scan exchange data for both the volume spread and order book depth. Bitwise’s report had detailed some of the practices used by exchanges to fake their reported volumes, and CMC’s solution appeared to take these factors into account.

In response to the evidence of fake volumes, Messari also implemented changes to its OnChainFX ranking algorithm. While its Real 10 Volume metric attempts to list exchanges in order of reliability and trustworthiness, the Liquid Market Cap uses volume-weighted prices along with Liquid Supply estimates to rank trading platforms by liquidity.

“Crypto data aggregators will have to evolve and track the various new data sources coming on board to the market,” said Bobby Ong, co-founder of CoinGecko, in a conversation with Cointelegraph. Since May 2019, the platform has consistently added variables to its Trust Score calculations, the latest one evaluating exchange security.

While these metrics were developed to ensure that exchanges couldn’t fake their volumes to improve their rankings, strict parents raise sneaky children. It wouldn’t be long before exchanges and blockchain projects alike would find new ways around these systems, too.

Cryptocurrency market surveillance firm BTI Verified published a detailed report in September on data accuracy of aggregator platforms, suggesting that among the top 50 exchanges ranked by CMC, only 32% presented unreasonably bloated volumes. Previous reports had pinned this ratio at 75%, which reveals a marked improvement in overall data quality.

When asked about the future of crypto data aggregators, Ong said that it would be interesting due to the “explosion of data being generated” in both centralized and decentralized spaces across various blockchains.

Like CoinGecko, Nomics and Messari, CMC eventually diversified and built on its initial Liquidity metric. The Liquidity Score, introduced in May 2020, incorporates additional information into its ranking algorithm, like the exchange’s web traffic, to estimate its user base.

Though things seem to have improved, aggregator platforms still have a long way to go. In its report, BTI Verified explained how exchanges have multiple avenues to trick the systems used by data providers and game their ranking algorithms.

“Each aggregator has a target market that they cater to, and they prepare guidelines according to that. With regards to differences in reported volume across these aggregators, what we have come across is each one has different requirements,” said Sumit Gupta, CEO of CoinDCX — an India-based crypto exchange.

A quick search on the web can reveal how easily an exchange can buy web traffic, and it’s far more straightforward than implementing wash trades. Liquidity measurements can be tricked using ghost orders: trades that appear on order books but disappear when engaged.

Exchanges that score poorly on one platform appear in the top rankings of others, indicating that some exchanges have found ways to adjust the data required to boost their rankings. Unless better methodologies are implemented, exchanges will soon find increasingly advanced ways to climb the ranks without any actual activity on their platforms.

Projects are still heavily incentivized to find ways to cheat these systems, be it through fake volumes, liquidity or web traffic. Data platforms with strict requirements, such as the need to be listed on a certain number of exchanges, hinder the growth of projects by pushing them to potentially illiquid exchanges and possibly exposing the token to needless volatility.

However, listing on fewer, more recognized exchanges is not conducive to ranking higher, as honest exchanges will always report lower volumes than those that mark up their trade numbers. “We don’t actually have a solution for the fake volume issue, at least not one that we’re able to implement anytime soon,” Nate Tsang, co-founder of crypto data aggregator website CoinFi, told Cointelegraph.

He noted that the solution was to collect all trade data from each exchange and use algorithms to detect wash trading patterns. “Of course, it becomes a cat and mouse game where the sufficiently motivated will find new ways to trick the algo,” Tsang added.

Instead of creating metrics to reduce the amount of misreported information, data providers should strive to create better incentive models for projects and exchanges. Guidelines that are more rewarding to blockchain-based projects will help to accelerate the industry’s growth.

Using real-world statistics, such as developer engagement, the number of employees and social media following, along with the metrics already in use, can help present more robust and accurate data for users. Due to the nature of decentralized networks, price data manipulation in one market can have overarching consequences on the overall prices, volatility and market sentiment.

Modern solutions that can combat fake volumes include decentralized oracles, which gather data from multiple sources and incentivizes data providers with tokens for reporting the truth. Using decentralized oracles could be the way forward, but until the technology can provide reliable service to integrate with enough platforms, how big of an impact they will make is still uncertain.

The current incentives that allow exchanges, data providers and tokens to take advantage of listing algorithms will be unsustainable in the long run. Today’s listing requirements and ranking mechanisms are detrimental to the growth of small projects and open avenues for manipulation from more influential players.

This isn’t a problem that can be attributed to just one component of the system. Unless aggregators attempt to create more sophisticated ways of ensuring data integrity, the cryptocurrency industry will only ever be remembered for its false presentation of a technological marvel.

Is Bitcoin’s vertical rally in danger? Why $30K isn’t the only level to watch
Swedish Bankers Air Concerns Over E-Krona Digital Currency Plan